Zaha Hadid Architects’ plans for two soaring skyscrapers at Vauxhall Cross could be the firm’s first foray into a mixed-use project in London, but the design is proving controversial.

The architecture firm submitted plans for the two towers, measuring 185 and 151 metres respectively, at the end of 2017.

The architects claim the scheme could bring 2,000 jobs and 260 new homes to the area, but critics are opposed to the height of the towers and the plans to demolish the existing public bus station to make way for private development.

Connected by a ten-storey podium, the development would include offices, retail space, a hotel and apartments. Until now Zaha Hadid Architects (ZHA) has only designed public buildings in London: the London Aquatics Centre and the Serpentine Sackler Gallery.

Renders show the two rectilinear towers rising from the fluted podium, with soaring floor-to-ceiling glazing in between a grid of oblong arches and indents to accommodate for outdoor terraces.

The Vauxhall Cross Island area has been identified as a “key regeneration site” by Lambeth Council and the proposed podium footprint would occupy what is currently a patch of scrubland covered in billboards in the middle of the Vauxhall Gyratory.

Permission had previously been granted on appeal to Squire & Partners in 2012, when it re-submitted plans to build towers 41 and 31 storeys high. The local council had refused the original 46 and 23 storey scheme.

However, the ZHA proposed towers are 53 and 42 storeys, with the Architects’ Journal reporting that campaigners have accused the architects of “attempting to add more height by stealth”.

ZHA said that the scheme “works with the height of the other proposed developments in the area” and that it will “sit better within the context of the emerging Vauxhall cluster” than the previous design.

The area is part wider Vauxhall, Nine Elms, Battersea Opportunity Area Planning Framework (OAPF), which has allowed for the proliferation of tall buildings along the western stretch of the River Thames’ south bank.

Further down the river in Nine Elms the new Kieran Timberlake-designed American Embassy almost caused an international incident when US President Donald Trump tweeted that he refused to cut the ribbon because it was in an “off location”. 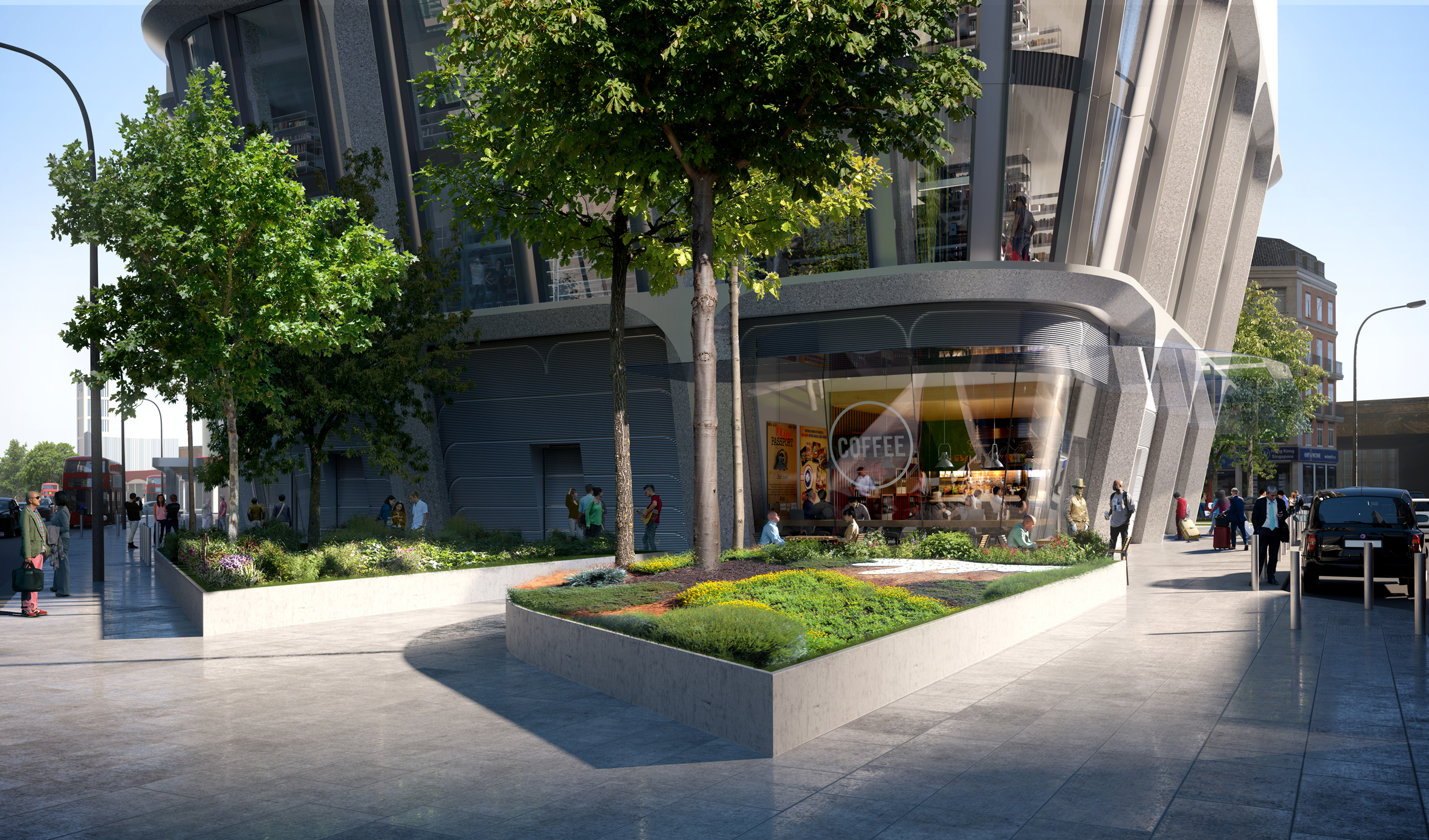 Along with fears that the two skyscrapers would overshadow the area, the ZHA proposal’s footprint encroaches on what is currently a major bus stop and the subject of an ongoing controversy.

Designed by Arup Associates, the Vauxhall bus station’s singular canopy of cantilevered arms are a local landmark and cost £4.5 million to build. It was only completed 13 years ago.

Lambeth Council has approved plans to demolish the bus station and replace it with a couple of facilities pavilions and scattered separate shelters for the bus stops.

Transport for London (TfL) will undertake a “land swap” with owners VCI Property Holdings, giving over a section of the land where the bus stop currently stands to developers in return for space to put the improved gyratory road system. 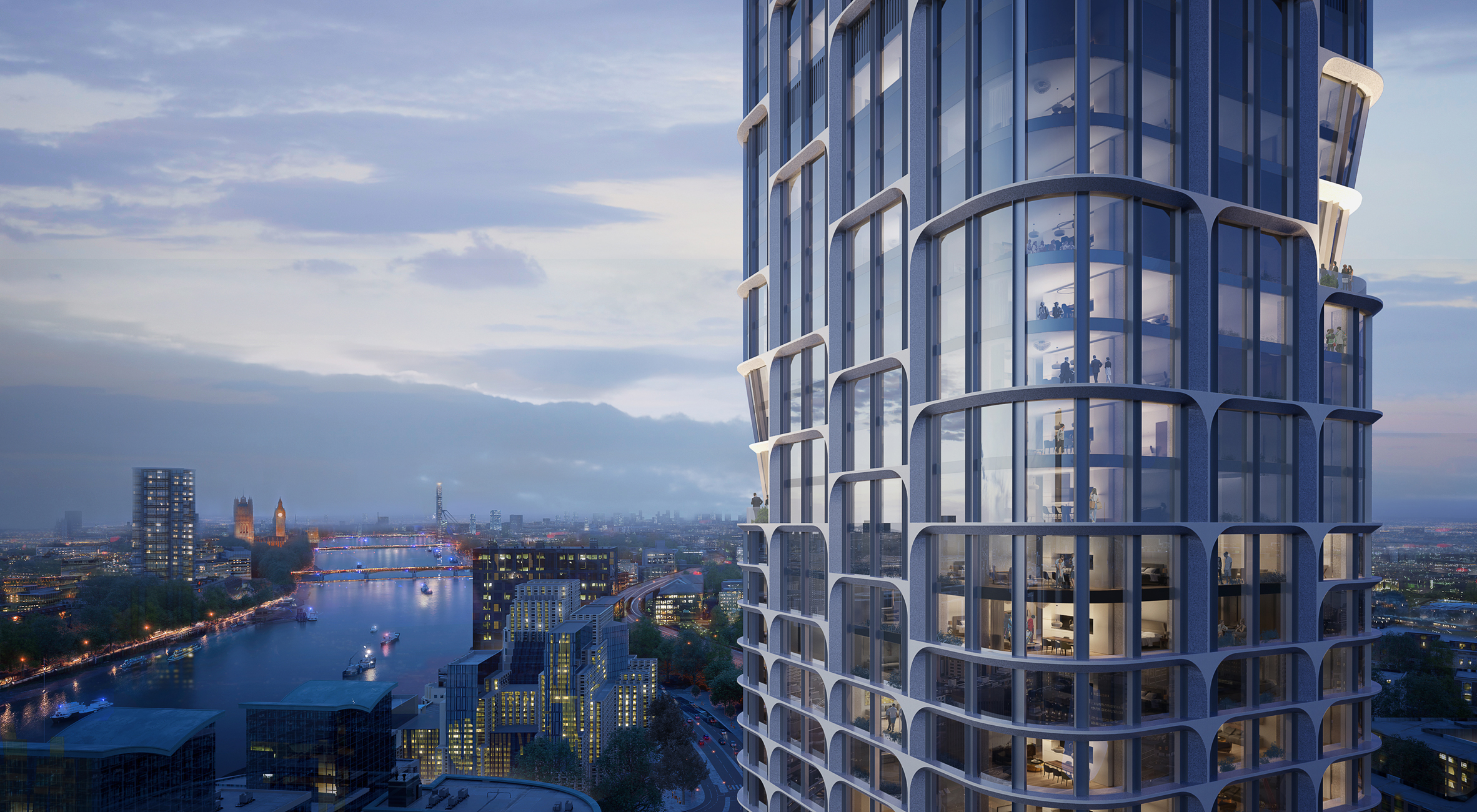 The plan has been contentious, with local residents and campaign groups angered by the council and TfL reconfiguring public facilities to accommodate a private project.

ZHA Architects has maintained that its proposal for the Vauxhall Cross Island site fulfils the brief and will help regenerate the area.

“The design responds to Lambeth Council’s aspirations for a district centre for Vauxhall by creating a vibrant new public square adjacent to the busy rail, underground and bus interchange,” ZHA said in a statement.

“This proposal will generate approximately 2,000 new jobs in the borough within a mixed-use design that includes a new public square, homes, offices, shops and a hotel – providing vital civic space, amenities and employment for the growing Vauxhall community.”

The podium will house the office and retail spaces, along with a 500-room Hilton Hotel. The shape of the podium will create a new public square and pathways to the bus stops. 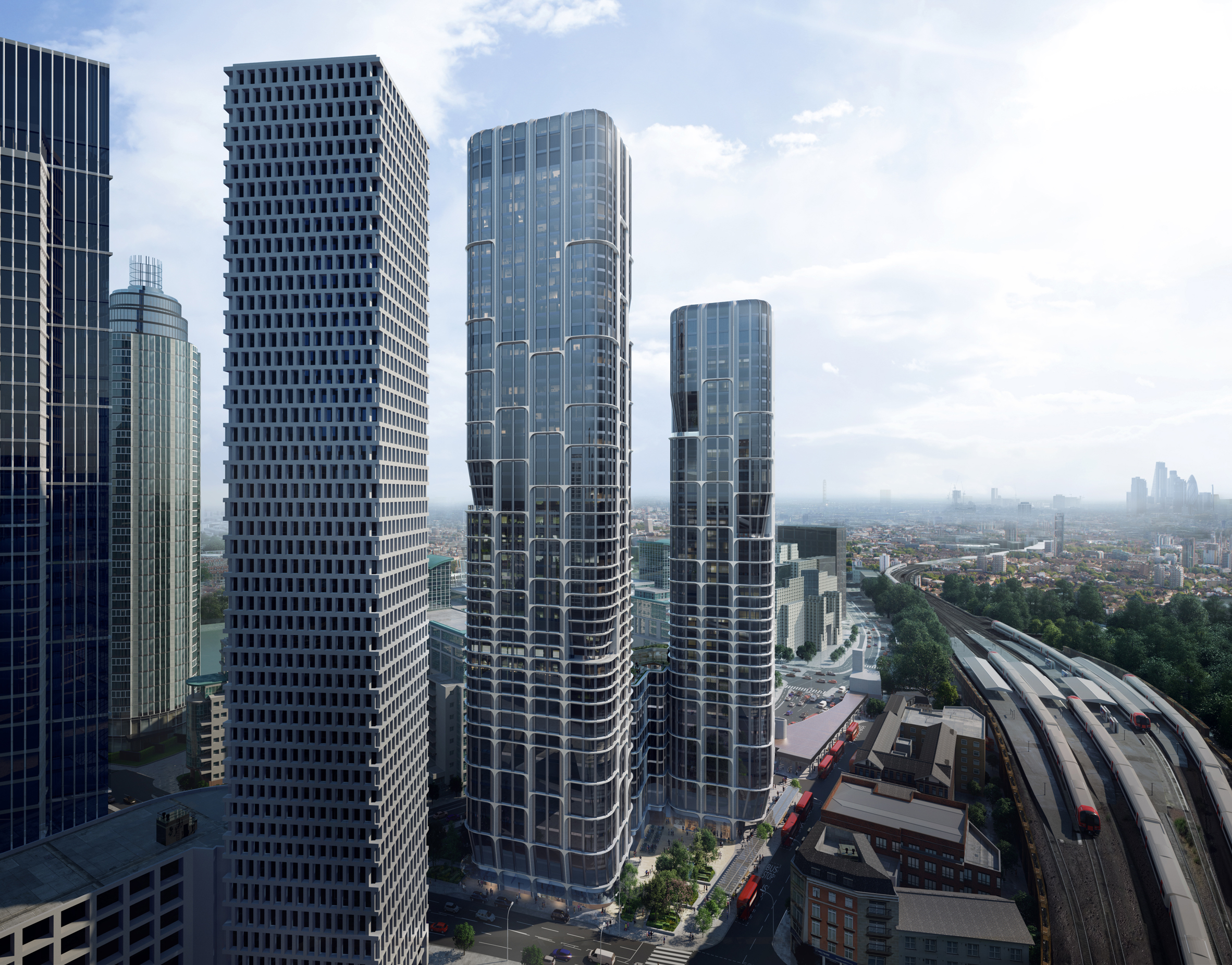 The architects estimate the project will create approximately 260 new homes, which will be “a mix of private and affordable”.

Architect Patrik Schumacher, who succeeded the late Zaha Hadid as the head of ZHA, has previously divided opinion over his comments at the 2016 World Architecture Festival in Berlin where he argued that social housing should be scrapped and public spaces privatised.

In an interview with the Guardian this week, Schumacher admitted he’d been shocked by the backlash, which saw demonstrators picketing his London office. He maintained that “general lack of innovation and over-bureacratisation of the development process” have been major factors in London’s “affordability crisis”.

He also said he believed that London was “too low density” and that taller buildings would help meet housing needs and bring prices down.

Luxury residential tower developments have proliferated in the OAPF zone. Across the road from the proposed ZHA towers Dubai-based DAMAC Properties are building AYKON London One.

The 50-storey glass tower will have interiors designed by Italian fashion house Versace, and a two-bedroom apartment on the 41st floor comes with an off-plan guide price of over £2.75 million.

On the other side of Vauxhall Cross Island sits the St George’s Wharf development, which includes the 181-metre-tall Vauxhall Tower, the UK’s tallest residential building. The penthouse alone went for £51 million.

However, there could be signs that London’s lucrative market in luxury new build apartments being bought off plan and flipped for profit could be slowing down.

Property Industry Eye reported today that the city’s foreign investor market is “on its knees”, with overseas speculators struggling to raise mortgages or recoup their losses.

Mexico City is about to get its own ZHA residential scheme, with the Bora Residential Tower set to become the city’s tallest apartment building.

A planned supertall skyscraper for 666 Fifth Avenue in New York City is unlikely to ahead after designs for the site, which is owned by the family of Trump’s son-in-law, were rejected by the project’s partner. 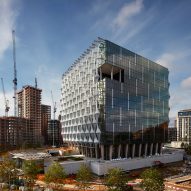